Flamory provides advanced bookmarking for AIM. It captures screen, selection, text on the page and other context. You can find this bookmark later using search by page content or looking through thumbnail list.

Flamory helps you capture and store screenshots from AIM by pressing a single hotkey. It will be saved to a history, so you can continue doing your tasks without interruptions. Later, you can edit the screenshot: crop, resize, add labels and highlights. After that, you can paste the screenshot into any other document or e-mail message.

Here is how AIM snapshot can look like. Get Flamory and try this on your computer. 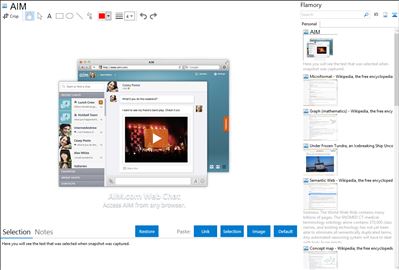 AOL Instant Messenger is an instant messaging and presence computer program which uses the proprietary OSCAR instant messaging protocol and the TOC protocol to allow registered users to communicate in real time.HistoryAOL Instant Messenger was released by America Online (AOL) in May 1997. Stand-alone official AIM client software includes advertisements and is available for Microsoft Windows, Windows Mobile, Mac OS, Mac OS X, Android, iOS, BlackBerry OS. The software, maintained by AOL, Inc., at one time had the largest share of the instant messaging market in North America, especially in the United States (with 52% of the total reported as of 2006). This does not include other instant messaging software related to or developed by AOL, such as ICQ and iChat.DownfallAs of June 2011, one reported market share had collapsed to 0.73%. However, this number only reflects installed IM applications, and not active users.ProtocolThe standard protocol that AIM clients use to communicate is called Open System for CommunicAtion in Realtime (OSCAR). Most AOL-produced versions of AIM and popular third party AIM clients use this protocol. However, AOL also created a simpler protocol called TOC that lacks many of OSCAR's features but is sometimes used for clients that only require basic chat functionality. The TOC/TOC2 protocol specifications were made available by AOL, while OSCAR is a closed protocol that third parties have had to reverse-engineer.