Flamory helps you capture and store screenshots from CDBurnerXP by pressing a single hotkey. It will be saved to a history, so you can continue doing your tasks without interruptions. Later, you can edit the screenshot: crop, resize, add labels and highlights. After that, you can paste the screenshot into any other document or e-mail message.

Here is how CDBurnerXP snapshot can look like. Get Flamory and try this on your computer. 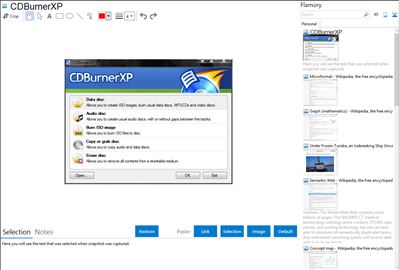 CDBurnerXP is a free application to burn CDs and DVDs, including Blu-Ray and HD-DVDs. It also includes the feature to burn and create ISOs, as well as a multilanguage interface. Everyone, even companies, can use it for free. It does not include adware or similar malicious components.

CDBurnerXP is also known as CD Burner XP. Integration level may vary depending on the application version and other factors. Make sure that user are using recent version of CDBurnerXP. Please contact us if you have different integration experience.