Flamory helps you capture and store screenshots from Damn Small Linux by pressing a single hotkey. It will be saved to a history, so you can continue doing your tasks without interruptions. Later, you can edit the screenshot: crop, resize, add labels and highlights. After that, you can paste the screenshot into any other document or e-mail message.

Here is how Damn Small Linux snapshot can look like. Get Flamory and try this on your computer. 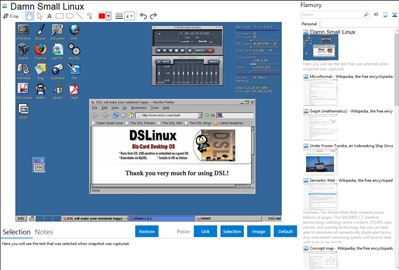 Damn Small is small enough and smart enough to do the following things:

* Boot from a USB pen drive

* Boot from within a host operating system (thats right, it can run *inside* Windows)

* Transform into a Debian OS with a traditional hard drive install

* Run fully in RAM with as little as 128MB (you will be amazed at how fast your computer can be!)

* Modularly grow -- DSL is highly extendable without the need to customize

DSL was originally developed as an experiment to see how many usable desktop applications can fit inside a 50MB live CD. But over time, Damn Small Linux grew into a community project with hundreds of development hours put into refinements including a fully automated remote and local application installation system and a very versatile backup and restore system which may be used with any writable media including a hard drive, a floppy drive, or a USB device.

Damn Small Linux is also known as DSL. Integration level may vary depending on the application version and other factors. Make sure that user are using recent version of Damn Small Linux. Please contact us if you have different integration experience.