Flamory provides advanced bookmarking for Eclipse Xtext. It captures screen, selection, text of the document and other context. You can find this bookmark later using search by document content or looking through thumbnail list.

Flamory helps you capture and store screenshots from Eclipse Xtext by pressing a single hotkey. It will be saved to a history, so you can continue doing your tasks without interruptions. Later, you can edit the screenshot: crop, resize, add labels and highlights. After that, you can paste the screenshot into any other document or e-mail message.

Here is how Eclipse Xtext snapshot can look like. Get Flamory and try this on your computer. 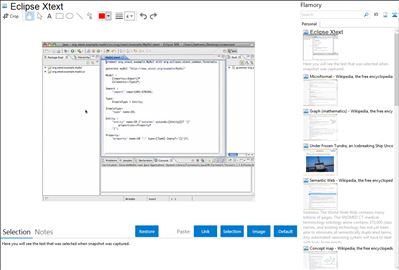 Xtext is an open-source framework for developing programming languages and domain-specific languages (DSLs). Unlike standard parser generators, Xtext not only generates a parser, but also a class model for the Abstract Syntax Tree and a fully featured, customizable Eclipse-based IDE.Xtext is being developed in the Eclipse Project as part of the Eclipse Modeling Framework Project and is licensed under the Eclipse Public License.HistoryThe first version of Xtext was published in 2006 in the openArchitectureWare project. The last version released under the oAW project is version 4.3. Since the beginning of 2008, Xtext is developed at Eclipse under the Eclipse Modeling Project. Joining Eclipse's annual simultaneous release, Xtext released version 0.7.0 (June 2009), 1.0 (June 2010), 2.0 (June 2011) and 2.3 (June 2012). The framework is mainly developed by the German company.FunctionalityTo specify a language, a user has to write a grammar in Xtext's grammar language. This grammar describes how an Ecore model is derived from a textual notation. From that definition, a code generator derives a ANTLR parser and the classes for the object model. Both can be used independent of Eclipse.

Eclipse Xtext is also known as Xtext. Integration level may vary depending on the application version and other factors. Make sure that user are using recent version of Eclipse Xtext. Please contact us if you have different integration experience.