Flamory provides advanced bookmarking for Google Wave. It captures screen, selection, text on the page and other context. You can find this bookmark later using search by page content or looking through thumbnail list.

Flamory helps you capture and store screenshots from Google Wave by pressing a single hotkey. It will be saved to a history, so you can continue doing your tasks without interruptions. Later, you can edit the screenshot: crop, resize, add labels and highlights. After that, you can paste the screenshot into any other document or e-mail message.

Here is how Google Wave snapshot can look like. Get Flamory and try this on your computer. 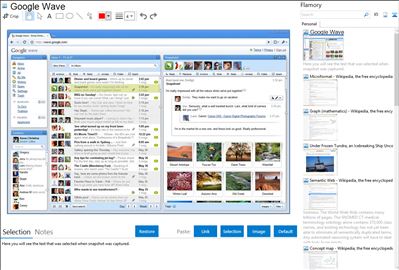 DISCONTINUED. READ BELOW. Google Wave was an online communication and collaboration tool that made real-time interactions more seamless -- in one place, you could communicate and collaborate using richly formatted text, photos, videos, maps, and more.

A wave is a conversation with multiple participants -- participants are people added to a wave to discuss and collaborate on its content. Participants can reply any time and anywhere within a wave, and they can edit content and add more participants as a wave develops. Its also possible to rewind waves with the playback functionality, to see what happened, and when.

Google announced in August 2010 that there were 'no plans to continue developing Wave as a standalone product', but that they would 'maintain the site at least through the end of the year [2010]'.

In September 2010 Google described its plans to develop the Open Source'd code into a standalone version (server and client) that would allow running Wave on your own hardware (albeit not with all features). (source: Google Wave Developers Blog )

Integration level may vary depending on the application version and other factors. Make sure that user are using recent version of Google Wave. Please contact us if you have different integration experience.