Flamory provides advanced bookmarking for GParted. It captures screen, selection, text of the document and other context. You can find this bookmark later using search by document content or looking through thumbnail list.

Flamory helps you capture and store screenshots from GParted by pressing a single hotkey. It will be saved to a history, so you can continue doing your tasks without interruptions. Later, you can edit the screenshot: crop, resize, add labels and highlights. After that, you can paste the screenshot into any other document or e-mail message.

Here is how GParted snapshot can look like. Get Flamory and try this on your computer. 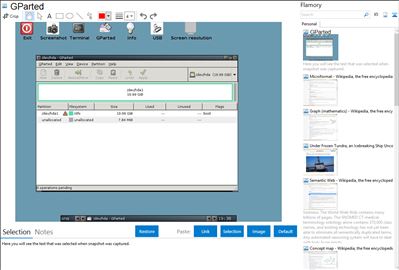 GParted is a GTK+ frontend to GNU Parted and the official GNOME Partition Editor application. It is used for creating, deleting, resizing, moving, checking and copying partitions, and the file systems on them. This is useful for creating space for new operating systems, reorganizing disk usage, copying data residing on hard disks and mirroring one partition with another (disk imaging).

GParted is developed on GNU/Linux. It can be used on other operating systems, such as Windows or Mac OS X, by booting from media containing GParted Live, which can be installed on CD, USB, PXE server, and Hard Disk then run on an x86 machine.

The bootable image is called GParted Live and enables all the features of the GParted application.

GParted is also known as GParted Live. Integration level may vary depending on the application version and other factors. Make sure that user are using recent version of GParted. Please contact us if you have different integration experience.