Flamory helps you capture and store screenshots from HyperNext Studio by pressing a single hotkey. It will be saved to a history, so you can continue doing your tasks without interruptions. Later, you can edit the screenshot: crop, resize, add labels and highlights. After that, you can paste the screenshot into any other document or e-mail message.

Here is how HyperNext Studio snapshot can look like. Get Flamory and try this on your computer. 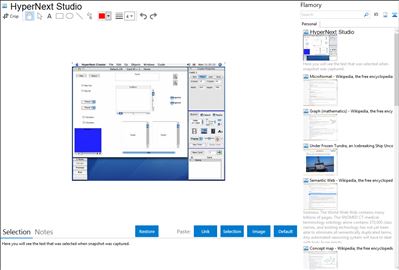 HyperNext Studio is an easy to use software creation system that allows hobbyists, students, educators, in fact almost anyone, to quickly start building their own software that works.

The HyperNext interface has just one design window and simple toolbar, and three modes: Design, Preview and Run. Controls such as buttons can be rapidly placed and their English-like scripts edited with its easy to use Script Editor.

Easy to use and great for beginners.

Many working examples to get you started.

Simple interface - a Design window and one Toolbar.

HyperNext has versions for both Mac & Windows.

Mac versions run on both OS X Leopard and below,

HyperNext Studio is also known as HyperNext. Integration level may vary depending on the application version and other factors. Make sure that user are using recent version of HyperNext Studio. Please contact us if you have different integration experience.