Flamory provides advanced bookmarking for JetBrains MPS. It captures screen, selection, text of the document and other context. You can find this bookmark later using search by document content or looking through thumbnail list.

Flamory helps you capture and store screenshots from JetBrains MPS by pressing a single hotkey. It will be saved to a history, so you can continue doing your tasks without interruptions. Later, you can edit the screenshot: crop, resize, add labels and highlights. After that, you can paste the screenshot into any other document or e-mail message.

Here is how JetBrains MPS snapshot can look like. Get Flamory and try this on your computer. 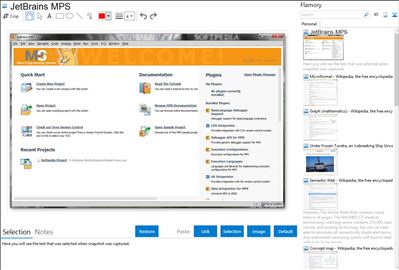 JetBrains MPS is a metaprogramming system which is being developed by JetBrains. It implements language-oriented programming. MPS is an environment for language definition, a Language Workbench, and integrated development environment (IDE) for such languages.Composable languagesDevelopers from different domains can benefit from domain specific language extensions in general purpose programming languages. For example, Java developers working with financial applications might benefit from built-in support of monetary values. Unfortunately, traditional text based languages are subject to text ambiguity problems which makes such extensions problematic.MPS supports composable language definitions. This means that languages can be extended, and embedded, and these extensions can be used, and will work, in the same program in MPS. For example, if Java is extended with a better syntax for collection and then again extended with a better syntax for dates, these extensions will work well together.MPS solves grammar ambiguity issues by working with the Abstract Syntax Tree directly. In order to edit such a tree, a text-like projectional editor is used.Reusable language infrastructureMPS provides a reusable language infrastructure which is configured with language definition languages. Also MPS provides many IDE services automatically: editor, code completion, find usages etc.Existing languages Base Language - 99% Java reimplemented with MPS. There are a lot of extensions of this language collections language dates language closures language regular expressions language structure language editor language constraints language typesystem language generator language.

JetBrains MPS is also known as MPS. Integration level may vary depending on the application version and other factors. Make sure that user are using recent version of JetBrains MPS. Please contact us if you have different integration experience.