Flamory helps you capture and store screenshots from MC Musiceditor by pressing a single hotkey. It will be saved to a history, so you can continue doing your tasks without interruptions. Later, you can edit the screenshot: crop, resize, add labels and highlights. After that, you can paste the screenshot into any other document or e-mail message.

Here is how MC Musiceditor snapshot can look like. Get Flamory and try this on your computer. 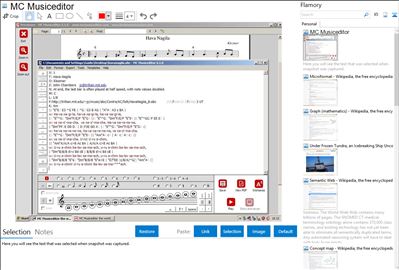 MC Musiceditor is free/open source (GPLv2) music notation software (Windows). It has been developed with only one purpose: to make life of musicians easier when making scores. This results in a userfriendly editor which makes professional scores without requiring specific knowledge (other than musical basics)! In short: MC Musiceditor is the easiest way to write, refine, hear and print professional scores.

With MC Musiceditor 6.1.0 and later you can convert MCM and ABC code to a Javascript webstring which can be parsed by Abcjs. Abcjs is an open source parsing and rendering tool for ABC written entirely in Javascript, so it allows sheet music to be rendered with the browser.

Integration level may vary depending on the application version and other factors. Make sure that user are using recent version of MC Musiceditor. Please contact us if you have different integration experience.