Flamory helps you capture and store screenshots from Microsoft Money by pressing a single hotkey. It will be saved to a history, so you can continue doing your tasks without interruptions. Later, you can edit the screenshot: crop, resize, add labels and highlights. After that, you can paste the screenshot into any other document or e-mail message.

Here is how Microsoft Money snapshot can look like. Get Flamory and try this on your computer. 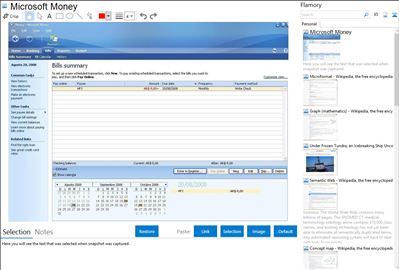 Microsoft Money was & will be Microsoft's personal finance software. It was designed for computers using the Microsoft Windows operating system, though versions for Windows Mobile were also available (available for Money 2000-2006 on select versions of Windows Mobile, up to, but not including, Windows Mobile 5.0).

The last version, released in August 2007, was called Microsoft Money Plus and came in four editions: Essentials, Deluxe, Premium and Home & Business.

Microsoft announced on 5th August 2010 that it is releasing Microsoft Money Plus Sunset (replacements for expired versions of Microsoft Money Essentials, Deluxe, Premium and Home and Business). The software comes with full functionality (sans online services) and allowed unlimited installation/re-installation without the need for activation.

Integration level may vary depending on the application version and other factors. Make sure that user are using recent version of Microsoft Money. Please contact us if you have different integration experience.