Flamory helps you capture and store screenshots from MSEide + MSEgui by pressing a single hotkey. It will be saved to a history, so you can continue doing your tasks without interruptions. Later, you can edit the screenshot: crop, resize, add labels and highlights. After that, you can paste the screenshot into any other document or e-mail message.

Here is how MSEide + MSEgui snapshot can look like. Get Flamory and try this on your computer. 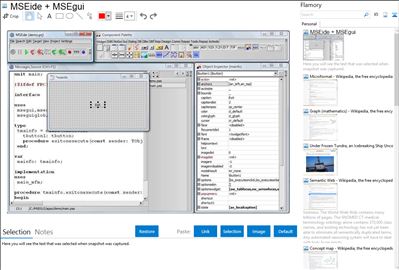 MSEide+MSEgui is new options in the programming world. MSEide+MSEgui is a package  IDE (Integrated Development Environment). MSEide+MSEgui developed by a programmer from Switzerland, Martin Schreiber began in 1999. MSEide+MSEgui use Free Pascal compiler, a compiler that is open source that has the benefits of cross-platform, that is, the compiler is able to produce applications for various operating systems (OS). FreePascal accordance with the slogan "Write once compile anywhere" so that the compiler is able to compile a program into the applications that can run on the Linux OS, FreeBSD, Mac OS X / Darwin, DOS, Win32, Win64, WinCE, OS/2, Netware (libc and classic) and MorphOS. But until now MSEide+MSEgui can be run on Windows and Linux only.

MSEide + MSEgui is also known as MSEide, MSEgui. Integration level may vary depending on the application version and other factors. Make sure that user are using recent version of MSEide + MSEgui. Please contact us if you have different integration experience.