Flamory helps you capture and store screenshots from OSFMount by pressing a single hotkey. It will be saved to a history, so you can continue doing your tasks without interruptions. Later, you can edit the screenshot: crop, resize, add labels and highlights. After that, you can paste the screenshot into any other document or e-mail message.

Here is how OSFMount snapshot can look like. Get Flamory and try this on your computer. 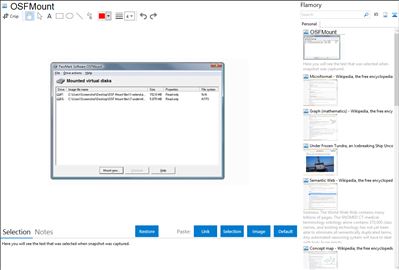 OSFMount also supports the creation of RAM disks, basically a disk mounted into RAM. This generally has a large speed benefit over using a hard disk. As such this is useful with applications requiring high speed disk access, such a database applications, games (such as game cache files) and browsers (cache files). A second benefit is security, as the disk contents are not stored on a physical hard disk (but rather in RAM) and on system shutdown the disk contents are not persistent.

OSFMount supports mounting images of CDs, which can be useful when a particular CD is used often and the speed of access is important.

Integration level may vary depending on the application version and other factors. Make sure that user are using recent version of OSFMount. Please contact us if you have different integration experience.