Flamory helps you capture and store screenshots from PowerBasic by pressing a single hotkey. It will be saved to a history, so you can continue doing your tasks without interruptions. Later, you can edit the screenshot: crop, resize, add labels and highlights. After that, you can paste the screenshot into any other document or e-mail message.

Here is how PowerBasic snapshot can look like. Get Flamory and try this on your computer. 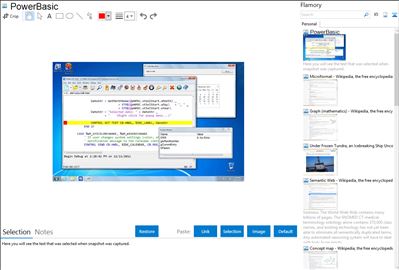 PowerBASIC is the brand of several commercial compilers by PowerBASIC Inc. that compile a dialect of the BASIC programming language. There are both DOS and Windows versions, and two kinds of the latter: Console and Windows. The DOS version has a syntax similar to that of QBasic and QuickBASIC. The Windows versions use a BASIC syntax expanded to include many Windows functions, and the statements can be combined with calls to the Windows API.

On November 6, 2012, Robert Zale, the creator of PowerBASIC, died. The company continues under the direction of his wife.

Integration level may vary depending on the application version and other factors. Make sure that user are using recent version of PowerBasic. Please contact us if you have different integration experience.