Flamory helps you capture and store screenshots from Rasmol by pressing a single hotkey. It will be saved to a history, so you can continue doing your tasks without interruptions. Later, you can edit the screenshot: crop, resize, add labels and highlights. After that, you can paste the screenshot into any other document or e-mail message.

Here is how Rasmol snapshot can look like. Get Flamory and try this on your computer. 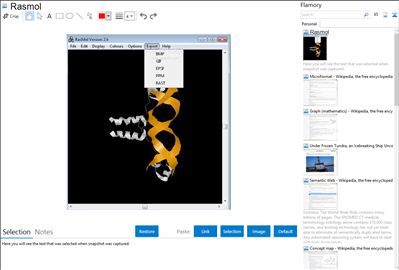 RasMol is a computer program written for molecular graphics visualization intended and used primarily for the depiction and exploration of biological macromolecule structures, such as those found in the Protein Data Bank. It was originally developed by Roger Sayle in the early 90s.Historically, it was an important tool for molecular biologists since the extremely optimized program allowed the software to run on (then) modestly powerful personal computers. Before RasMol, visualization software ran on graphics workstations that, due to their expense, were less accessible to scholars. RasMol has become an important educational tool as well as continuing to be an important tool for research in structural biology.RasMol has a complex version history. Starting with the series of 2.7 versions, RasMol is licensed under a dual license (GPL or custom license RASLIC).RasMol includes a language (for selecting certain protein chains, or changing colors etc.). Jmol and Sirius has incorporated the RasMol scripting language into its commands.Protein Databank (PDB) files can be downloaded for visualization from members of the Worldwide Protein Data Bank (wwPDB). These have been uploaded by researchers who have characterized the structure of molecules usually by X-ray crystallography, NMR spectroscopy or electron microscopy.

Integration level may vary depending on the application version and other factors. Make sure that user are using recent version of Rasmol. Please contact us if you have different integration experience.