Flamory helps you capture and store screenshots from SeaMonster by pressing a single hotkey. It will be saved to a history, so you can continue doing your tasks without interruptions. Later, you can edit the screenshot: crop, resize, add labels and highlights. After that, you can paste the screenshot into any other document or e-mail message.

Here is how SeaMonster snapshot can look like. Get Flamory and try this on your computer. 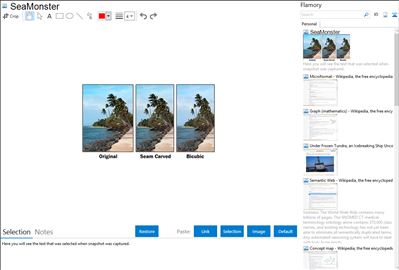 .Net based application that does Content-Aware Image Resizing just like Photoshop CS4.

See for Executable and Sourcecode.

Features included in this first release:

* For maximum reusability, the seam carving algorithm is implemented in its own assembly (separate from the client application).

* Seams may be carved both horizontally and vertically.

* Two seam functions are included: cumulative and standard. Cumulative should faithfully represent the function in the original paper.

* There are three methods for comparing seams: total, average, and diffbias. Diffbias is experimental and may not be very useful.

* A simple bias map function makes it easy to preserve image details or ask for them to be removed.

* Multiple energy functions are included. Sobel is likely the most useful.

* Carved images can also be saved or copied to the clipboard.

Note that the algorithm is computationally expensive, so for testing, it's much faster to work with smaller images.

Integration level may vary depending on the application version and other factors. Make sure that user are using recent version of SeaMonster. Please contact us if you have different integration experience.