Flamory helps you capture and store screenshots from Tyrell N6 by pressing a single hotkey. It will be saved to a history, so you can continue doing your tasks without interruptions. Later, you can edit the screenshot: crop, resize, add labels and highlights. After that, you can paste the screenshot into any other document or e-mail message.

Here is how Tyrell N6 snapshot can look like. Get Flamory and try this on your computer. 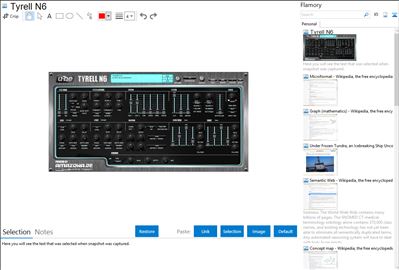 Tyrell is the name of a project by the German online magazine Amazona.de. A reader survey and follow-on forum posts provided a pool of ideas for a low cost HARDWARE analogue synth, which Mic 'Moogulator' Irmer used to develop quite a powerful concept. Based on a design similar to Roland's classic Juno 60, a few modules and novel features could be added without making the product too expensive...

However, it soon became obvious that developing the hardware would have taken years, so I offered to turn the core design into a freeware softsynth. That was late 2010. Only a few weeks later, TyrellN6 was already out for beta testing! After some serious bug-fixing and fine tuning, the final release version became available in April 2011.

Integration level may vary depending on the application version and other factors. Make sure that user are using recent version of Tyrell N6. Please contact us if you have different integration experience.