Flamory helps you capture and store screenshots from FreeOTFE by pressing a single hotkey. It will be saved to a history, so you can continue doing your tasks without interruptions. Later, you can edit the screenshot: crop, resize, add labels and highlights. After that, you can paste the screenshot into any other document or e-mail message.

Here is how FreeOTFE snapshot can look like. Get Flamory and try this on your computer. 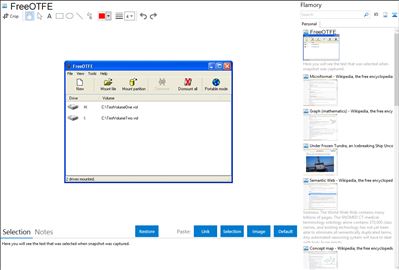 It creates "virtual disks" - anything written to which is automatically encrypted before being stored on the computer's hard drive or USB drive.

Using this software, you can create one or more "virtual memory cards" on your PDA - anything written to which will be automatically, and securely, encrypted before being stored.

Can be used in "portable mode", which allows its to be kept on a USB drive, together with its encrypted data, and carried around. This allows it to be used on any PC without installation to "mount" and access the encrypted data through a virtual disk.

- Easy to use; full wizard included for creating new volumes

- Powerful: Supports numerous hash/encryption algorithms, and provides a greater level of flexibility than a number of other (including commercial!) OTFE systems

- "Hidden" volumes may be concealed within other FreeOTFE volumes, providing "plausible deniability"

- Supports password salting (up to 512 bits), reducing the risks presented by dictionary attacks.

FreeOTFE is also known as FreeOTFE4PDA. Integration level may vary depending on the application version and other factors. Make sure that user are using recent version of FreeOTFE. Please contact us if you have different integration experience.